Let's save the temple of Afaia in Aegina.

Let's save the temple of Afaia in Aegina.

The temple dedicated to Afaia, an ancient divinity of the Greek world, is one of the best preserved doric temples and overlooks the island of Aegina, in the Saronic Gulf. What we see today is a construction executed at the beginning of the fifth century BC on the same site of a previous temple, of about 570, which was destroyed in 510, very probably due to an earthquake. 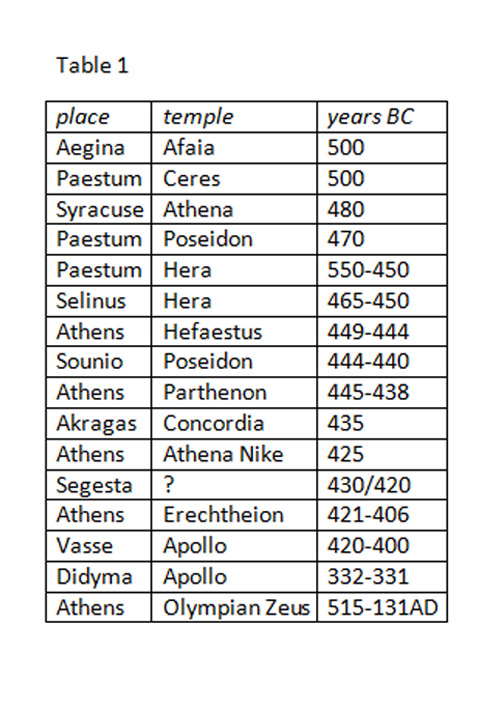 All the temples of classical and archaic Greece that have maintained their original structures, or part of them, are listed in Table 1. In the first column is mentioned the place, in the second the god to which the temple was dedicated, in the third the year or years of construction. They are listed according to the year in which the construction was completed. In the case of Didyma, the construction has never been completed.

The purpose of this list is to have a class of elements that is as homogeneous and compact as possible. Those temples have not suffered any natural destruction, and in particular seismic events. It can be noted that almost all those temples are included in the time span ranging from 500 to 400 BC. After that year the construction of the temples is rarefied. The case of Didyma is of a temple that was partially destroyed, but enough was left to be able to fit into the logic of my list. For the temple of Olympian Zeus in Athens the case is more complex: it was started in 515, abandoned in 510, resumed in 174 and abandoned again in 163. Finally it was completed between 129 and 131 AD. Components of its structure disappeared in different occasions, but it seems that it has almost always been spared from the violence of nature. The first abandonment, in 510, is very suspect because it happened in the same year in which the temple of Afaia in Aegina was destroyed, and therefore it is reasonable to think that the cause of abandonment was not simply for political reasons, that is to say the change from tyranny to democracy, as commonly thought. The coincidence with the year in which Rome took place the transition from monarchy to the republic suggests that some natural events of global extension have influenced the change of both the Athenian and Roman societies.

It is remarkable that the construction of the temples of Table 1 does not go beyond 500 BC, and it is possible that something catastrophic could have happened at the end of the sixth century. Therefore the date of the destruction of the temple of Eghina, the year 510 BC, deserves attention. But what has been said does not mean that all the temples built before 510 have collapsed due to earthquakes. For example, we know that the temple of Poseidon at Cape Sounio is a reconstruction of a previous temple, of the 6th century, which is thought to have been destroyed during the second Persian war.

Years ago I have researched on cyclical geological phenomena and I have found that cycles with very long durations, of 3 Ga and 180, 11, 0.67 Ma, involved the formation of mountain ranges, the formation of metallic minerals , glaciations, variations in the sea level, etc. Moreover, the duration of those cycles are almost periodic and are closely related to each other.

If we examine shorter cycles, with 41 Ka durations and less, they appear in the first column of Table 2. We know that the first of these cycles governs the variation of the Earth's axial tilt. According to Denton and Porter (1970) the expansion and withdrawal of mountain glaciers in the last 5000 years have followed cycles of about 2500 years. With the same cycle occurred the variations of the sea level and a particular kind, discontinuous, of consolidation of the sediments of the last 12 thousand years (Mortari, 2010). The 2500 year cycle seems to be very regular, and several attempts have been made to specify its period. The discontinuous consolidation of recent fine-grained sediments leads to the emergence of a sudden subsidence, and the phenomenon is accentuated the more the sediment thickness is large. Several cities built in areas of that kind have undergone such lowering so that they had to be abandoned. For example Tartessus, at the mouth of the Guadalquivir River, disappeared around 500 BC; but the most interesting case is that of the town of Sybaris, a Greek colony that grew up at the mouth of the Crati River in Calabria: its abandonment date was established precisely in 510 BC.

At the beginning of each cycle of about 2500 years, the phenomenon of a rapid subsidence actually occurs twice, spaced out by about 240 years. That double subsidence is documented in Sibari and in Rome (Mortari, 2005, 2010). So a subsidence started in 510 and another around 270 BC. Since that sudden subsidence occurs for rapid compaction of recent soils, it must be assumed that abnormal overpressures of the water contained in the pores develop in them since the beginning, which decrease frictional forces, causing the instability of masses of large volumes and therefore submarine landslides develop; one of them occurred about 5000 years ago in the Gulf of Oristano, Sardinia, and has been documented with absolute dates and geotechnical tests (Mortari, 1994, 2010). A phenomenon of this type is attributable to the large landslide that struck the city of Thonis-Herakleion built near the coast of the Nile delta just northeast of Alessandria and displaced it by tens of kilometers.

These processes of discontinuous consolidation of sediments are attributed to variations of an electric field present in the solid Earth, and the cause of all these cyclic variations is identified in a variation of the universal coefficient of gravitation (Mortari, 2010).

In Table 2, starting from the cycle of about 41 thousand years, the duration of the minor cycles and the relationship between them are listed. In most cases these are quasi-periods. Most probably only in the case of the cycle of about 2500 years the relevant period is constant. The lesser regularity with which the quasi-period of 41 thousand years changes is well documented: sometimes it can be formed by 16 minor cycles of about 2,500 years and sometimes of 17 cycles. Precisely, it is formed by two times 16 and once 17, for a total of 49 cycles, thus coming to delineate a regular 123 Ka supercycle.

The cycle of about six months has been well documented by the observations made in the TOPEX / Poseidon and Jason missions on sea level changes (Nerem et al., 2010). Recently, the quasi-period has been clarified by referring to the sea level records of the tide gauge stations of the Baltic Sea. In the 80s of the last century there were two peaks in the months of November and May (as well as in August for seasonal effects), while in the 50s and 60s the values of October and April prevailed, and in the first two decades of the same century there were highs in August and February. Therefore there was a delay of one month every 25 years approximately, equivalent to 1.2 days per year. The six-month cycle actually has an average duration of 0.5016 years. This quasi-period, with its four significant figures, results to be the best determined in the table 2.

Starting from this value of 0.5016 years, the values of the durations presented in the first column of Table 2 have been recalculated, after the values of the ratios in the second column have been adjusted starting from the idea that each cycle must contain an entire number of minor cycles. The new values of duration are in the fourth column and we can see in particular that the 2510 year cycle became 2528 years long.

Relying on the constancy of this last cycle and on the date of abandonment of Sybaris (510 BC), it is possible to foresee the moment in which it is to be expected that other events of the same type will occur. Since consolidation occurs at velocities which decrease in a logarithmic way, the phenomenon is very rapid at the beginning; therefore it is very likely that in the case of Sybaris the subsidence began in the early months of the year 510 BC. So we can think that the moment we are looking for will be in the first half of 2019. This beginning will be immediately signaled by a simultaneous substantial variation of sea level, which, according to Mortari (2010), should fall by about 25 cm within six months.

Such a lowering of the sea necessarily implies an expanding Earth. The surface increase will not affect the cratonic regions, i.e. the continents, but the oceanic areas, and the theory of plate tectonics can help us to understand where the greatest changes are most likely to occur. So in the areas characterized by instability seismic activity must necessarily increase (Mortari, 2010).

Bendick and Bilham (2017) have detected a cyclical occurrence of the frequency of the most intense earthquakes (M ≥ 7) of the last 120 years, which they relate to the variation of the rotation speed of the Earth, and predict that the next frequency peak will be in 2019. The cycle observed has a duration that is actually about half the duration of the 10.5 year cycle of Table 2. This means that we have to expect seismic events of much more importance than it is expected by these two Authors because at the conclusion of a 2500 year cycle the effects will be more important than the effects relevant to the minor cycles.

In conclusion it seems very probable that with the beginning of the new cycle of 2500 years the seismic activity will be present in sensitive areas with more frequency and intensity. The same thing should have happened about 2500 years ago, and this is the main reason that explains the absence in Table 1 of temples older than 500 BC that have preserved their structure up to the present day. All this suggests that the site of Aegina, which had been hit in 510 BC, is likely to be hit again at very short term.

Therefore I propose to proceed promptly with the temporary dismantling of the monument and the replacement of its elements with others made up of suitable materials (heavier at the bottom and lighter at the top), linked together. The duration of these measures could be of about 10 years and it will be better evaluated on the basis of what the observation of future seismic events will suggest. Obviously these arguments are valid not only for the temple of Afaia in Aegina but also for other monuments.